The origin of the Victoria Hindu Parishad can be traced back to about the middle of the 1970s when a rather small group of Hindu families in the Greater Victoria region got together and started holding usually occasional prayer meetings in the home of one or the other member in the group. Though not very rapidly, this group of Hindu families grew bigger and bigger so much so that the need for holding such prayer meetings not only on a regular (possibly monthly) basis, but also in a larger rented place such as a church hall, became imminent. More importantly, on 14 January 1979, the Victoria Hindu Parishad was officially registered with the Government of the Province of British Columbia and the Government of Canada as a Canadian charity organization. During all these years, the need for a Hindu Temple in the Greater Victoria region was felt by many local members of the Victoria Hindu Parishad and also by such outsiders as (for example) Pandit Gian Chand Shastri of Vancouver, who used to visit Victoria occasionally for performing religious ceremonies in individual homes in Victoria.

The first two Presidents of the Victoria Hindu Parishad, Mr. Guru Datt Jhagra and Mr. Arvind N. Thakore, as well as a very traditional and active member, Mrs. Dhana Moodley, ought to be credited for being remarkably instrumental in the initial development and the general upkeep of the Victoria Hindu Parishad. It was in the year 1987 when the third President, Dr. Hari Mohan Srivastava, took over the affairs of the Parishad (consisting of only 22 paid members) with the verbal commitments by several influential Parishad and Board members that they would strongly and wholeheartedly support Dr. Srivastava in his plans and efforts to build a Hindu Temple in Victoria. As an individual who did not hold any official position in the Parishad prior to his becoming its President in 1987, the very first item that came to Dr. Srivastava’s attention was the fact that the Parishad had already lost its status as a Canadian Charity Organization many years before 1987. Apparently, this happened after the Parishad had continuously ignored numerous reminders by the Federal Government to comply with the rules and regulations (and sundry other stipulations) set forth by the Federal Government and indeed after the Parishad’s name had unfortunately been notified publicly in the Federal Government’s Gazette. With the help and wholehearted co-operation of Mr. Ranen Kumar Ghosh (the then Secretary of the Parishad), and by constantly extending and properly documenting the Parishad’s activities and programs to reach out to many other charity, educational, and religious organizations, including (for example) the Parishad’s close co-operation with the newly-established India Friendship Association at the University of Victoria, the Parishad was able to get its status as a Canadian Charity Organization reinstated by the Federal Government. And, at the same time, the Parishad applied for and received written permission by the Federal Government to raise and collect a sum of up to $200,000.00 for the Temple Fund without incurring any income-tax consequences thereby. It was then found, albeit the hard way, that it is a lot simpler for an organization to first obtain the status as a Canadian Charity Organization than to actually get such a status reinstated after it has been lost for any reasons whatsoever!

Dr. Srivastava served as a President of the Parishad for a total of 8 years from 1987 until he chose to step down on 21 January 1996 when Dr. Chandra Paul Singh succeeded him in the very first Annual General Meeting which was held in the already-established Hindu Temple. In the gap during the academic year 1990–1991 when Dr. Srivastava was on frequent professional overseas trips during his sabbatical leave from the University of Victoria, Dr. Raghuveer Singh Prasad (who earlier as well as later served as the Secretary of the Parishad) took over as the President of the Parishad for a one-year (care-taking) term. Other Parishad Presidents who succeeded Dr. Chandra Paul Singh include Dr. Chaman Lal Singla, Mr. Surinder Kumar Sharma, Mr. Gopal Krishan Ghai, Dr. Prasad V. V. Chintalapati, Mr. Satish Kumar Palta, Mr. Guru Datt Jhagra, Mr. Mukesh Kashyap, Mr. Hari Krishan Sharma, and Mr. Balvinder Kumar Handa. An up-to-date chronological list of the past and present Parishad Presidents is being appended to this brief historical overview of the Victoria Hindu Parishad. All of these Parishad Presidents, together with the members of their respective Board of Directors and the Board of Trustees, have made significant contributions in one way or the other toward the establishment and uplift of the Victoria Hindu Temple. Especially for the excellent (and, usually, single-handed) maintenance and uplift of the inside and the outside of the Temple premises, the name of Mr. Surinder Kumar Sharma (formerly of Port Hardy and an active Parishad member) deserves to be mentioned.

During each of the years 1987, 1988 and 1989 when Dr. Srivastava was the President of the Parishad with its paid membership having been already tripled, with the generous financial support and grant received annually by the Parishad from the Federal Government under its Heritage Language Program, the Parishad organized and held regularly (in the Clearihue Building of the University of Victoria) two levels of Hindi classes: the senior level taught by Dr. Chaman Lal Singla and the junior level taught by Dr. Srivastava himself. Right after these classes, interested students from both levels used to assemble in the senior-level classroom for participating in Hindu mythological story sessions conducted especially for children by Dr. Sunder Sreenivasachar, Dr. Padmanabhan S. Sri, Dr. Mahesh M. Swamy, and others.

With the approval and full support by the Parishad’s Board of Directors, and encouraged by the Federal Government’s above-mentioned written permission to raise and collect a sum of up to $200,000.00 for the Temple Fund without incurring any income-tax consequences, Dr. Srivastava was able to ascertain and estimate the possible financial support by the community at large by launching on 16 April 1989 a door-to-door campaign, in the Greater Victoria region and elsewhere on the Vancouver Island, for collecting duly-signed pledges to the Temple Fund. The door-to-door collection of the pledged as well as new donations to the Temple Fund actually began on 04 October 1993, by which time the pledged donations by some members had already been received by the Parishad. Many Parishad’s members and directors wholeheartedly supported and successfully organized these door-to-door collection teams. The names of Mr. Bhagwan T. Hingorani (a senior Board Member), Mrs. Urmila Jhagra and Dr. Rekha Srivastava (who also served the Parishad as a Vice-President and as a Director for several years) deserve to be mentioned here, especially for the evening after-dinner door-to-door collections made by Mrs. Urmila Jhagra and Dr. Rekha Srivastava.

The Temple Fund continued to grow satisfactorily, and the enthusiastic and sporadic search for a suitable place for the Temple was successful when, in early 1995, an almost one-century-old Anglican Church at 1934 Cultra Avenue in Saanichton was found to be on sale and (more importantly) within the financial reach of the Parishad. It had a Worship Hall, which was ideally suitable for our Pooja and Prayer Meetings, and a Friendship Hall, a significant portion of which continued to generate regular monthly income for the Temple as the Anglican Church’s Day-Care Centre for Children even after the establishment of the Temple there on 18 June 1995. Later, of course, when the Parishad’s financial position got much healthier, both the Worship Hall and the Friendship Hall began to be used solely by the Temple as it is done today.

Successful completion of projects such as the Hindu Temple Project requires financial as well as moral support and encouragement of one and all. One does indeed expect to encounter some negative and opposing forces which, in the case of the Victoria Hindu Parishad, started a rather unprecedented (but, remarkably, short-lived and not-so-popular) campaign against the Parishad’s categorically-stated mandate not to use any part of the Temple Fund in organizing and paying fully for non-religious social, cultural and entertainment programs and events in Victoria. Size-able donations to the Parishad were received not only from Hindu as well as Sikh families on the Vancouver Island, but also from some of Dr. Srivastava’s overseas professional colleagues and short-term visitors at the University of Victoria of different faiths and beliefs, especially from Europe and South-East Asia. And, right after the ceremonial inauguration of the Temple in June 1995 when a small group of the Parishad members led by Dr. Srivastava visited and appealed to the Sunday congregation in the VHP Hindu Temple at Burnaby, generous donations were received from the Burnaby Temple itself and also from the members of their congregation. The present sets of murthis and idols of the deities, and many other items of regular use in the Victoria Hindu Temple, were also gratefully received by the Temple as donations in kind, which were made by individual members, families and businesses at different times. The Victoria Hindu Temple is a public place of worship and for related religious, cultural and meditational activities pertaining to the Hindu (Vedic) mythological, philosophical and spiritual thoughts. It is certainly not owned, in any way, by any individual or by any group of people. It is open to and welcomes everyone who is interested in the Hindu (Vedic) Religion, Spirituality and and Philosophy.

[During the first few years of its existence as the Victoria Hindu Parishad, the position of the Parishad’s President was held and shared alternately by Mr. Guru Datt Jhagra and Mr. Arvind N. Thakore until the beginning of the year 1987 when it was taken over by Dr. Hari Mohan Srivastava.] 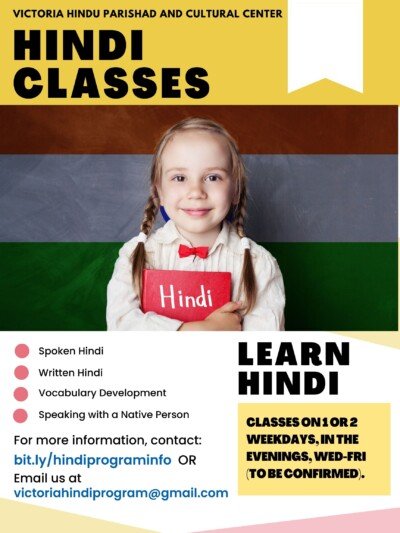